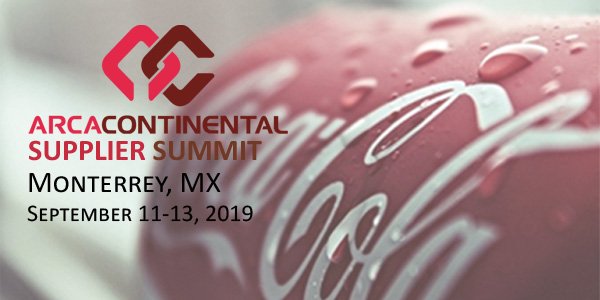 Arca Continental produces, distributes and sells non-alcoholic beverages under The Coca-Cola Company brand, as well as snacks under the brands of Bokados in Mexico, Inalecsa in Ecuador and Wise in the U.S. Furthermore Arca lead the high-value added dairy category in Ecuador, under the Tonicorp brands.

Arca Continental is the second-largest Coca-Cola bottler in Latin America and third largest in the world.

Arca Continental owns 20 bottling plants in Mexico and 14 plants in Ecuador, Peru and Argentina. Arca Continental has recently entered into a Joint Venture in the United States with Coca-Cola Bottling Company UNITED to operate territories in Texas and parts of Oklahoma, New Mexico and Arkansas. The venture between Arca Continental and United owns 11 cold-fill production facilities, including nine in Texas.

The Summit took place over three days and included expert presentations from 24 carefully selected suppliers. During the three days, individual breakout sessions between the Arca Continental's participants and the suppliers were arranged in order to allow further in-depth discussions.

The positive feedback from the Arca delegates and supplier delegates show that the expectations of the Summit were met. We look forward to continue our good work in the future!