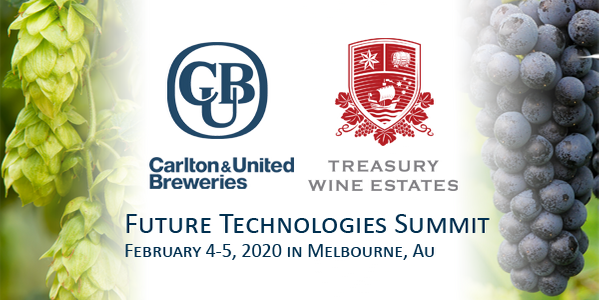 Carlton & United Breweries (CUB) is part of ABInBev, the largest brewer in the world, and is responsible for producing some of Australia's most famous beers and ciders, incl. Victoria Bitter and Carlton Draught. CUB employs around 1,600 people and produces over 7+ million hectoliters of beer every year from their sites at Abbotsford, Yatala, Cascade, Brookvale and Hindmarsh.

Treasury Wine Estates (TWE) is one of the world’s largest wine companies, with more than 3,400 people employed at their 40+ wineries globally. TWE has an annual wine production of more than 3 million hectoliters and is known for brands such as Penfolds and Lindeman’s. TWE also operates more than 13,000 planted hectares of vineyards in Australia New Zealand and the USA.

The summit took place in the Carlton Brewhouse in Abbotsford and focused on bringing leading suppliers to the beer and wine industry together, in order to identify the future technologies and optimization solutions for potential industrial implementation in the coming period.

CUB & TWE participated with 30+ executives during the two days and met with 16 selected technology providers and universities.

The positive feedback from all the CUB & TWE  teams show that the expectations of the Summit were met. We look forward to continue our good work in the future!